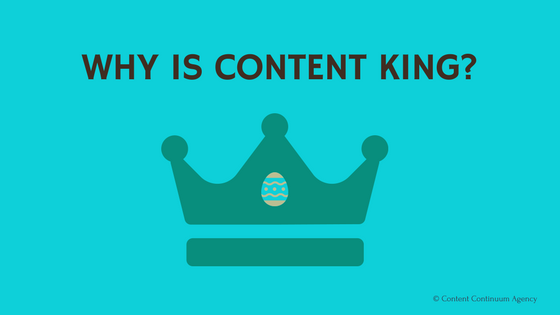 There are two main drivers that make content “King.”

The first one is quite obvious to everyone, and that is the Internet. The Internet has changed business models and leveled the playing field for all businesses since the mid-90s, allowing small companies to look and act like bigger businesses, and large companies to become more intimate with their customers as only smaller businesses had been capable of doing. It has created new economies of scale (Uber and Airbnb, for example, in the new sharing or collaborative economy) and near-instant communication around the world.

Presciently, in 1996 Bill Gates wrote an essay entitled, “Content is King,” and declared the creation of an interactive network such as the Internet would greatly broaden the definition of content beyond what the media and TV networks produced at the time. Thanks to the Internet, content has also become much more easily created, distributed, and consumed.

The second driver, which is just as obvious but not thought of as often, is our very own Human Nature.

We evolved with larger frontal lobes in our cerebral cortex to process more information faster, to solve more complex problems, and to influence the quality of our lives rather than remain reactive to the environment and the seasons.

“As far as we know, only Homo sapiens can talk about entire kinds of entities that they have never seen, touched or smelled,” according to Yuval Noah Harari, the author of the New York Times Bestseller, “Sapiens, A Brief History of Humankind.”

This capacity to not just imagine, but to communicate about imagined reality, is quite possibly the most unique feature of the human language. It powers our ability to successfully cooperate in large numbers – from small villages to global communities. When large numbers of strangers believe in common myths, the imagined reality (e.g., politics, religion, and corporations) exerts real force on the real world.

Have you ever stopped to think about the extraordinary impact of this elevated form of storytelling?

Humans interact with our environment through all of our senses; we’re curious, we absorb information from Day One. Children learn by seeking out content in all forms.  So, it’s no surprise we enjoy beautiful photos, exciting videos and dramatic music.

Content will always be King because humans desire the stories told through these various mediums, as well as the emotions that are tied to them. And while Bill Gates rightly predicted success for those who “propel the Internet forward as a marketplace of ideas, experiences, and products – a marketplace of content,” today the Internet continues to enable a tidal wave of new communication methods that brands and marketers simply cannot ignore. The opportunities are boundless – carpe momentum!

The Power of Repurposing

Advocates of a holistic approach to content marketing, we strive to develop a strategy that encompasses all the important touch points where your customers are today and in the future.